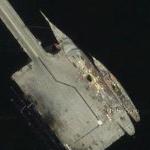 By Hinkkanen @ 2006-02-25 07:15:30
@ 31.195155, 29.866612
Alexandria, Egypt (EG)
El Horria (originally called Mahroussa) was a Royal Yacht built for Isma'il Pasha, the Khedive of Egypt in 1865. She was built by the Samuda Brothers and designed along the same lines as HMY Victoria and Albert II, and remained in service with the Egyptian royal family until 1951. She had two significant alterations, being lengthened by 40 feet in 1872, with a further 16.5 feet being added in 1905 along with the replacement of her two paddle wheels with triple screws powered by steam turbines. After the abdication of King Farouk, she was taken over by the Egyptian government for use as a naval training ship, and was given her current name. She spent most of her career in the eastern Mediterranean, but did participate in the International Naval Review held to commemorate the bicentennial of the United States of America. The ship's condition is immaculate, and duty in her is considered a great honor in the Egyptian Naval Forces. El Horria goes to sea about three times a year, usually just for the day.
Links: www.maritimematters.com
1,647 views