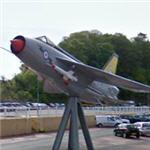 By kjfitz @ 2010-03-12 10:15:12
@ 50.41637, -4.395695
St Germans, United Kingdom (GB)
The English Electric Lightning is a supersonic jet fighter aircraft of the Cold War era, noted for its great speed and unpainted natural metal exterior finish. It is the only all-British Mach 2 fighter aircraft. The aircraft was renowned for its capabilities as an interceptor; RAF pilots described it as "being saddled to a skyrocket". English Electric was later incorporated into the British Aircraft Corporation, later marks being developed and produced as the BAC Lightning.

The Lightning was used throughout much of its service life by the Royal Air Force and the Royal Saudi Air Force. The aircraft was a regular performer at airshows and was the first aircraft capable of supercruise. The Lightning was also one of the highest performance planes ever used in formation aerobatics. The Lightning aircraft is now largely retired to museums, but three examples still fly at "Thunder City" in Cape Town, South Africa.
Links: en.wikipedia.org
533 views