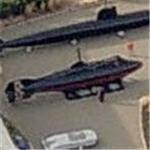 By kjfitz @ 2008-05-19 17:45:27
@ 41.387736, -72.087115
Groton, Connecticut (CT), US
The SS X-1 was a non-commissioned experimental submarine designed to both defend and penetrate shallow waters and enemy harbors where large conventional submarines can not operate. A unique engineering feature was the closed- loop hydrogen peroxide system that allowed the use of the diesel engine under the water independent from an external air source. This system provided long term underwater operations in much the same manner as a nuclear powered submarine. With the adoption of nuclear power in the USS Nautilus, the US Navy abandoned this method of underwater propulsion, though it has been carried on by other navies.
Links: en.wikipedia.org, www.navsource.org
924 views