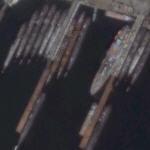 By kjfitz @ 2006-06-13 00:56:40
@ 52.915191, 158.497916
Petropavlovsk-Kamchatskiy, Russian Federation (RU)
The primary Pacific Fleet operating bases are Pavlovskoye [Pavlovsk] near Vladivostok and Rybachiy near Petropavlovsk. Petropavlovsk is home to much of Russia's Pacific nuclear submarine fleet.

Rybachiy is an inspectable submarine facility under the START-1 agreement. The United States and the Soviet Union signed the Strategic Arms Reduction Treaty (START) on 31 July 1991. When START entered into force on 05 December 1994, the signatories began to implement the Treaty's complex set of intrusive inspection and verification measures. As part of START's verification provisions, each signatory was required to declare all facilities related to ICBMs, submarine-launched ballistic missiles (SLBMs), and heavy bombers. The former Soviet Union (FSU) has declared over five dozen START-inspectable sites in all categories, including five SLBM facilities and six submarine facilities.
Links: www.globalsecurity.org
25,129 views

AKpilotEMT
@ 2006-06-13 01:41:35
One thing I find fascinating about these subs is you can freely walk up to them. Don't know if you can just climb inside but if it was a sunny day you could probably lay a towel and sunbathe all day long on top a Russian submarine and no one would bother you. So many subs are just dockside and rusting. Perfectly usable subs idle because of no money for upkeep.