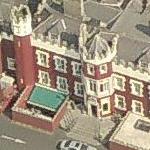 By kjfitz @ 2009-08-28 09:10:25
@ 53.269465, -6.112855
Dublin, Ireland (IE)
The original house, Mount Mapas was built in 1740 by Col. John Mapas, although records show that a building or buildings stood here at a much earlier date. By 1755 it was acquired by a Captain Maunsell who was succeeded by a Colonel Loftus in 1770. The Colonel’s stay was a short one; in 1772 he advertised the castle and its 150 acres for sale despite his short tenure. During his time in residence however, Colonel Loftus and his nephew converted the barren stoney soil to meadow and pasture and cut a road around the hill, his successor was Lord Clonmel who in 1790 improved the estate further spending £ 3,000 in the process, a handsome sum of money in the early19th century.

The name Robert Warren is very much associated with the Castle and it was he who in 1840 enlarged the house and called it Killiney Castle. He also restored and added to the monuments on the hill, repairing the obelisk originally erected by Col. Mapas and donated land and most of the money for the building of Killiney parish church. The land on the hill – once part of the estate - was purchased from his son, Robert Warren Jnr. by Queen Victoria’s jubilee memorial association and subsequently re-named Victoria Hill - as we still know it today.

Its subsequent owners included a Mrs Chippendale Higgan. The trees and shrubs she planted can still be seen today and provide a decorative setting for the castle.

Killiney Castle exchanged hands again with the late Paddy and Eithne Fitzpatrick taking over the helm in the 1970’s, transforming it into a first class hotel and re-naming it Fitzpatrick Castle Hotel. Today their daughter Eithne Fitzpatrick Scott-Lennon owns the hotel and together with her family continues to guide the way to its continued success for what is proving to be a major contribution to the Dublin hotel scene whilst maintaining the original Castle charm and Irish welcome long associated with the Fitzpatrick Hotel Group.
Links: www.fitzpatrickcastle.com
1,249 views