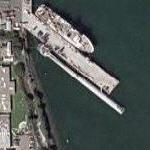 FLIP stands for Floating Instrument Platform: it is actually a huge specialized buoy. One of its creators described it as looking like a 355-foot long ( 108 m) baseball bat.

All the living and working areas are in the top part of FLIP. (If FLIP were a bat, this would be the grip end.) Most of the bottom (the end of the bat that connects with the ball) is empty compartments. When these are filled with air, FLIP floats in its horizontal position. When they are filled with seawater (which is heavier than air) the lower 300 feet of FLIP sink under the water and the lighter end rises. Twenty-eight minutes later, FLIP stands vertically, and its working areas have risen as much as five stories into the air.

Animation of the flip