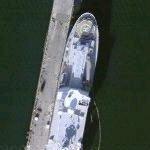 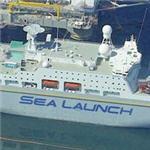 The Assembly and Command Ship—or ACS—is an all-new, specially designed vessel that serves as a floating rocket assembly factory while in port, provides crew and customer accommodations, and also houses mission control facilities for launches at sea. The ship was built at the Govan Shipyard in Glasgow, Scotland. In the fall of 1997, the ship sailed for Russia, where special equipment for handling rocket components and for commanding and controlling launches was installed and tested. It arrived in Long Beach, Calif., on July 13, 1998, after a voyage through the Panama Canal.

The ACS is 660 feet long, approximately 106 feet wide, with a displacement of more than 34,000 tons and has a cruising range of 18,000 nautical miles. The ACS provides accommodations for up to 240 crew members, customers and VIPs—including medical facilities, dining room, recreation and entertainment facilities.

The Sea Launch platform for launching rockets used to be located here in the old Google Maps images but is not present since the most recent google database update.
Links: www.sea-launch.com
1,964 views