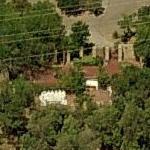 In 1947, he told a Star reporter that his work was the result of a promise he made to God while lying wounded on a French battlefield during World War I.

After moving to Tucson in 1938, Lucero began molding his religious statues from damp riverbed sand. He lived in a cardboard-and-plywood shack beneath the then two-lane Congress Street bridge.

“His work was more visible than he was,” said Matt Perri, 62, who grew up about a block away from where the sculpture park is now.
Links: www.azstarnet.com, www.roadsideamerica.com
1,068 views