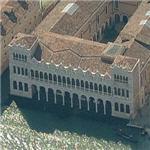 The palace was constructed in the first half of the 13th century by Giacomo Palmier, an exile from Pesaro. The Venetian Republic purchased it in 1381 for Niccolò II d'Este, the Marquess of Ferrara. During it's early history, the palazzo also served as a home to many visiting dignitaries.

From the seventeenth century until 1838, served as a one-building-ghetto for Venice's Ottoman Turkish population. The palace then served as a combination home, warehouse, and market for the Turkish traders.

A number of restrictions were placed on the palazzo and its residents, including restrictions on the times one was able to enter and leave the ghetto, as well as on trading. Among other things, Venetian Turks imported wax, oil, crude wool to the city.

When the Venetian Republic was abolished by Napoleon Boneparte in 1797, the Turkish traders continued to live in the palazzo until 1838.

From 1890 to 1923, the area was home the Museo Correr collection, which was moved to the Procuratie Nuove and Ala Napoleonica musems, at the Piazza San Marco, after 1923. Today, the area houses the Venetian Museum of Natural History, with historical collections of flora and fauna, fossils, and an aquarium.
Links: en.wikipedia.org
1,781 views