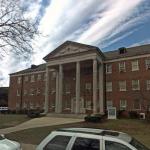 By kjfitz @ 2013-09-19 19:06:00
@ 33.207611, -87.544408
Tuscaloosa, Alabama (AL), US
Foster Auditorium is a multi-purpose facility at the University of Alabama in Tuscaloosa, Alabama. It was built in 1939 as a Works Progress Administration project and has been used for Alabama basketball, women's sports (in the 1970s and 1980s), graduations, lectures, concerts, and other large gatherings, including registration. Its status as the largest indoor building on campus came to an end in 1968 with the opening of the Memorial Coliseum. The building housed the Department of Kinesiology until 2006. In April 2009, the University announced a major renovation for the auditorium. After the renovation, the Crimson Tide women's basketball and volleyball programs moved back to Foster Auditorium, their original home.

The facility is named for Richard Clarke Foster, president of the University of Alabama from 1937 to 1941.

The building was declared a National Historic Landmark on April 5, 2005.
Links: en.wikipedia.org
722 views