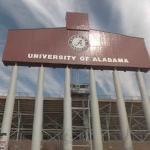 By Matheus_ @ 2012-01-02 06:27:49
@ 33.206369, -87.550584
Tuscaloosa, Alabama (AL), US
Bryant–Denny Stadium, located in Tuscaloosa, Alabama, is the home stadium for the University of Alabama football team. The stadium opened in 1929, and was originally named Denny Stadium, in honor of former Alabama president George Hutchenson Denny. The stadium's name was amended to Bryant–Denny Stadium in 1975 after the Alabama legislature chose to honor famed Alabama coach Paul "Bear" Bryant. It has a seating capacity of 101,821, and is the second largest stadium in the SEC, the fifth largest stadium in the United States and the eighth largest non-racing stadium by seating in the world.
Links: en.wikipedia.org
1,121 views