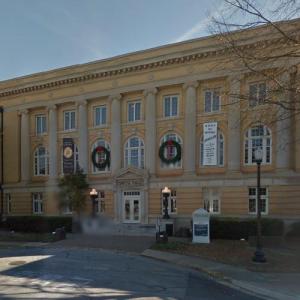 By Matheus_ @ 2011-11-27 06:34:45
@ 33.211992, -87.544221
Tuscaloosa, Alabama (AL), US
The Alabama Museum of Natural History is the state's natural history museum, located in Smith Hall at the University of Alabama campus in Tuscaloosa. The oldest museum in the state, it was founded in 1831. The exhibits depict the natural diversity of Alabama from the Age of Dinosaurs, the Coal Age, and the Ice Age. Collections include items relating to geology, zoology, mineralogy, paleontology, ethnology, history, and photography. The Grand Gallery Exhibition Hall houses a replica of a Basilosaurus cetoides, an Eocene whale that has been designated as the State Fossil. Exhibits of special interest include the skull of a mammoth dredged from the Tombigbee River near Demopolis and the Hodges meteorite. It hit a woman as it fell to earth near Sylacauga on November 30, 1954. The museum sponsors expeditions throughout the year, as it has since 1979.
Links: en.wikipedia.org
976 views