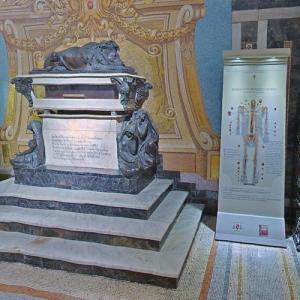 From his death to 1891 his coffin was placed at various places at the cathedral but finally gave it a final place in this tomb.
1977 a wooden coffin was discovered in a crypt with his name on it. The remains were examined and it was confirmed it was his remains and the real coffin was placed in the tomb.

To the right of the tomb is a display of the remains.
Links: en.wikipedia.org, www.atlasobscura.com
828 views