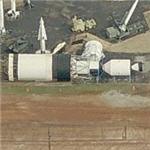 Two flight-quality Skylabs were built. The first was de-orbited and crashed in Western Australia in 1979; the second, a backup, is on display at the National Air and Space Museum in Washington, DC. A full scale training mockup once used for astronaut training is located at the Lyndon B. Johnson Space Center visitor's center in Houston, Texas. Another full scale training mockup is now kept at Huntsville, Alabama, made from spare parts. It is currently being restored.
Links: www.saveskylab.org
1,234 views