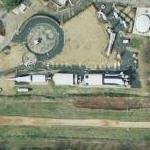 The largest production model of the Saturn family of rockets, the Saturn V was designed under the direction of Wernher von Braun at the Marshall Space Flight Center in Huntsville, Alabama, with Boeing, North American Aviation, Douglas Aircraft Company, and IBM as the lead contractors. It remains the most powerful launch vehicle ever brought to operational status, from a height, weight and payload standpoint, although the Russian Energia, which flew only two test missions, had slightly more takeoff thrust.

In all, NASA launched thirteen Saturn V rockets between 1967 and 1973, with no loss of payload. The design payload was the manned Apollo spacecraft used by NASA for moon landings, and the Saturn V went on to launch the Skylab space station.

At the U.S. Space & Rocket Center, made up of S-IC-D, S-II-F/D and S-IVB-D (all test stages not meant for actual flight)(soon to be moved to a new visitor's center).
Links: en.wikipedia.org
1,961 views