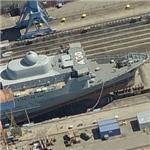 The Alster is a reconnaissance ship, which was originally intended to gather data on Soviet ships. She has a wide array of modern electromagnetic, hydroacoustic, and electro-optic sensors for strategic intelligence gathering. Her sensitive antennas can identify radar locations monitor flights, and can also listen in on radio and phone conversations. She can be used as an advanced warning unit. Her crew is a mixture of German Navy sailors and German secret service agents.
Links: en.wikipedia.org
3,190 views