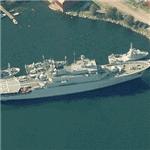 HMS Carlskrona, is to be mothballed due to a lack of officers. A decision on whether to refit, sell or scrap the minelayer will be made later in the autumn 2007.

Carlskrona returned from her most recent long voyage in 2005. Since then, she has been kept in port most of the time. A maintenance crew of eight people has kept her in working order.

HMS Carlskrona was refitted in 2002 at a cost of 225 million Swedish crowns. The refit left the ship fit for active service until at least 2018-20.
Links: en.wikipedia.org
2,572 views