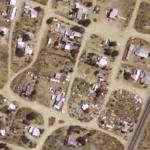 By kjfitz @ 2006-10-20 09:20:12
@ 35.356944, -117.617462
Johannesburg, California (CA), US
Originated by C. Taylor and T. McCarthy started the process of separation of Placer Scheelite and gold by shipping the tungsten ore to Germany. In 1906 E B De Golia and Mr Atkins purchased the claims, built the first tungsten mill ending the hand sorting of ore as the only concentrating method. In 1907 the railroad was in place and the place became known as Atolia, a contraction of the names of the owners of the claims. In its heyday the town had four restaurants, three general stores, a drug store, two stationary stores, two shoemakers, one hotel, three rooming houses and several lodging tents, four pool rooms, four barber shops, an ice cream parlor, picture show, garage, three butcher shops, a newspaper, and new school house for 60 pupils. Today you wouldn't know it was ever there.
Links: www.high-desert-memories.com
1,154 views