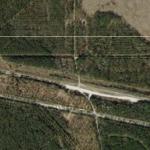 Named after the Confederate general Braxton Bragg, this town was built around an important railroad junction installed by the Santa Fe Railroad system in 1902. The railroad line transported lumber and other supplies servicing the oil industry near Beaumont, Texas.

Several years later, the local industry would begin to shift its shipping lanes and abandon the railroad. The local post office that had served the railroad and oilfield workers was closed in 1914. In addition to the relocation of oilfield workers into other communities, the rail line extending from Bragg Station south to the small community of Saratoga was dismantled in 1934.

Today, all that remains of Bragg Station is a small agricultural community and a locally famous dirt road. The Ghost Road leading south to Saratoga is the center of a local legend of a ghost light. The Light of Saratoga has been witnessed by multitudes of people along the dirt path which has now been designated a scenic drive county park.
Links: en.wikipedia.org
523 views