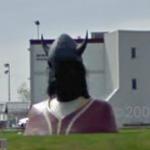 Apparently graduates refer to it as Satan and every single household on the street across from it signed a petition against it being erected. It was vandalized in 1995 or 1996 to have blonde hair, makeup and a pink bra!

It is dressed in a fur-trimmed red hat during December.
Links: www.bigthings.ca
521 views