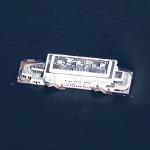 The McBarge, officially named the Friendship 500, was a McDonald's restaurant, built on a barge for Expo '86 in Vancouver, British Columbia. Moored on Expo grounds in Vancouver's False Creek, it was the second floating McDonald's location in the world, intended to showcase future technology and architecture. Although the floating design allowed for the barge to operate in a new location following the exhibition, the derelict McBarge has since 1991 been anchored empty in Burrard Inlet, amid industrial barges and an oil refinery.

The restaurant by designed by Robert Allan Ltd. for Expo '86 and was one of five McDonald's locations on the Expo grounds, all of which were constructed for a total of $12 million. It was initially intended to be used as a McDonald's restaurant after Expo '86, but the barge remained empty at the Expo grounds until 1991, when the new owner of the grounds forced McDonald's to remove it. It has since been anchored derelict in Burrard Inlet, north of Burnaby, British Columbia.
Links: en.wikipedia.org
2,974 views