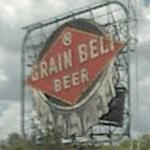 By adrbr @ 2009-01-22 12:08:12
@ 44.985631, -93.263422
Minneapolis, Minnesota (MN), US
The name refers to the "Grain Belt" of the American Midwest where much of the world's supply of barley, corn, soybeans and grain is produced. The diamond-shaped logo was introduced early on, though it wasn't until the late 1930s that a rendering of a bottlecap was added as background. After prohibition a large billboard was erected on Nicollet Island next to the Hennepin Avenue Bridge around 1940. For years, it flashed the letters in sequence ("G-R-A-I-N B-E-L-T BEER"). This sign still stands today as a local landmark. Grain Belt introduced cap sealed conetop steel cans in the 1930s. At the same time, the company offered its beers in longneck bottles and on draft.
Links: en.wikipedia.org
580 views