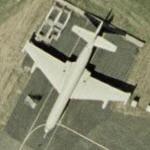 By kjfitz @ 2007-08-05 18:10:54
@ 53.331311, -2.155667
Manchester, United Kingdom (GB)
The Nimrod is a maritime patrol aircraft developed in the United Kingdom. It is an extensive modification of the de Havilland Comet, the world's first jet airliner. It was originally designed by de Havilland's successor, Hawker Siddeley, now part of BAE Systems. A major modification was the fit of a large weapon bay under the fuselage that can carry and drop torpedoes, mines, bombs and other stores. Sonobuoys for tracking submarines are dropped from special launchers in the rear of the fuselage.
Links: en.wikipedia.org
882 views