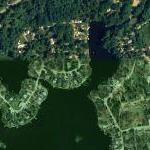 In the late 1830s, George Reeves, a New York farmer, started several businesses in the area — a general store, and a mill, and a distillery — which became the core of a minor population center; by the 1840s, enough people had immigrated to make a 70-person school viable (assuming 19th century birth rates, this pegs the population somewhere close to its current level).

In 1841, as one story goes, Reeves was asked what he wanted the town to be called and responded, "I don't care, you can name it Hell if you want to." His later attempts to rechristen it Reevesville or Reeve's Mills proved futile.

Hell's main export is, appropriately, kitsch. Among other things, it has a "fully non-accredited" college that sells half-singed diplomas, a small post office in the back of the general store, a motorcycle dealership, and an ice cream parlor. Hell Creek runs through town, and a bar next to the small dam across the creek is known as "The Dam Site Inn".
Links: www.hell2u.com
9,370 views

Comments have been disabled for this map
Nearby Maps (50 km): 309