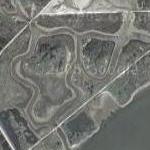 A suburban subdivision (in the shadow of the massive Baytown Refinery) which was vacated due to flooding problems. Roads and lots for 400 homes were carved out of the bushes on this 450 acre riverfront peninsula in the 1950's. Flooding from a storm surge in 1961 was the first incident which halted further development. Levees and pumps were installed to protect the existing homes, however another flood in 1983 caused an evacuation, afterwhich FEMA bought out the residents interests, and the community was condemned. Now being turned into a natural preserve.
Links: clui.org
7,016 views