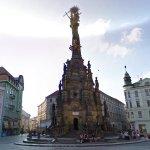 By mlc1us @ 2009-12-03 12:58:00
@ 49.593733, 17.250531
Olomouc, Czech Republic (CZ)
A Baroque monument in the Czech Republic, built in 1716–1754 in honour of God. The main purpose was a spectacular celebration of Catholic Church and faith, partly caused by feeling of gratitude for ending a plague, which struck Moravia (now in the Czech Republic) between 1714 and 1716. The column was also understood to be an expression of local patriotism, since all artists and master craftsmen working on this monument were Olomouc citizens, and almost all depicted saints were connected with the city of Olomouc in some way.

It is the biggest Baroque sculptural group in the Czech Republic. In 2000 it was inscribed on the UNESCO World Heritage List as "one of the most exceptional examples of the apogee of central European Baroque artistic expression".
Links: en.wikipedia.org
446 views