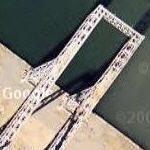 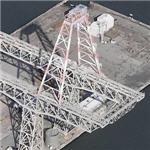 Easily visible as you drive from San Francisco International Airport to downtown San Francisco, this crane was built in 1947. A news clipping written at the time describes its intended purpose:

"WORLD'S LARGEST overhead traveling crane, capable of lifting battleship gun turrets and other huge sections weighing as much as a million pounds, is shown being erected by U. S. Steel's American Bridge Company in the San Francisco Naval Shipyard at Hunter's Point, California. Completion of the giant lift will make Uncle Sam fastest on the draw among the nations in the replacing of battleship guns. These large caliber weapons wear down their rifling in a comparatively few rounds. Then the guns and their turrets are exchanged for new ones or for those which have been reconditioned. Swifter repair service for fighting ships also will be made possible by the twin cranes that will operate singly or in tandem atop a bridge type runway 207 feet high. The 730-foot runway spans a pier 405 feet wide, extending 162 1/2 feet over the water on each side. Total of 8,400 tons of steel went into the runway structure and cranes."

The triangular tower atop the crane was added for Polaris rocket testing during the late 1950s. (The following photo in this set shows a rocket test in progress)

"OPERATION SKYCATCH--This sequence shows how a huge overhead assembly at the San Francisco Naval Shipyard catches a multi-ton dummy Polaris missile in mid-air and keeps it from free-flight. Left to right: Powerful blast sends missile skyward. At top of its trajectory, it is snubbed by modified arresting gear engine. Then the dummy Polaris is lowered for examination removal of instrumentation, and preparation for next test. In earlier testings the missile was hurled out into San Francisco bay and then retrieved. Lockheed Missiles and Space Division, who released these pictures, said this new method permits accurate study on dummy missiles which are structurally identical in live Polaris missiles."
1,455 views

Analogman
@ 2005-12-04 21:23:19
Hunter's Point is in one of the worst neighborhoods in San Francisco. I was there for about 8 or 9 months in 1987. The buses and taxis wouldn't go there after dark and we were advised not to stop at any of the businesses along the roads leading from the shipyard to the interstate. It simply wasn't safe.