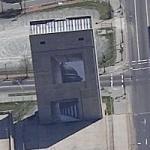 The concrete-column air shaft serves as ventilation for the I-395/Center Leg Freeway/Third Street tunnel, a project that got its start in 1955. The first portion of the project was built 1966-1973 and the second 1979-1982. The project was originally designed to connect all the major highways surrounding D.C., but ended up only connecting I-395 to New York Avenue (Route 50), leading to some of the lovely beach traffic entanglements we experience every summer.

The air shaft was probably part of the 1973 completion, or at least the project is heavily tied to the Nixon's administration residency in our fair city, so that is where DCist would assume the Nixon reference comes in to play.