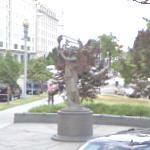 The Victims of Communism Memorial was dedicated by President George W. Bush on June 12, 2007. The dedication ceremony featured the unveiling of the "Goddess of Democracy," a bronze replica of a statue erected by Chinese students in Tiananmen Square, Beijing, China in the spring of 1989.
Links: victimsofcommunism.org
430 views