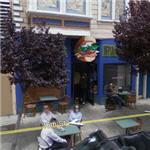 By kjfitz @ 2010-02-21 14:27:46
@ 37.76435, -122.43127
San Francisco, California (CA), US
Ike's Place began as one of Ike Shehadeh's ideals. A San Francisco native, Ike believed then, as he still believes now, that sandwiches should only be made with the finest ingredients and the utmost quality control. Ike was astonished at the lack of good, honest sandwich shops in The City, and opened Ike's Place sandwiches on Halloween 2007 to ensure that people received the best sandwiches possible for their money. 1000+ reviews on Yelp, one review in the Chronicle, the Best "Gut Bomb" award from SF Weekly, the Bay Guardian's "Best of Bay: Best Sandwiches" award, and several months later, Ike is still just as committed to producing high quality sandwiches.

Ike's is one of the few remaining shops where the guy on the sign is right there, ready to take your order, make sure it's made right, give you special offers and newly invented sandwiches, or just chat.

All Ike's Place sandwiches are made to order, and come with Ike's (soon-to-be) patented Dirty Sauce, Ike's house garlic aioli sauce, made with numerous herbs, spices, of course garlic, and some of Ike's own secret ingredients. Dirty Sauce is spread on the tops of Ike's sandwiches and baked with the bread, turning it into Dirty Garlic Bread, and then re-spread on the bottoms, just for that extra flavor. Even mayo-phobes love Dirty, so try it before you knock it, even if you only want it baked on top!
Links: www.ilikeikesplace.com
588 views