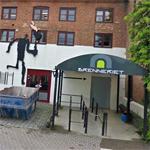 The story involves an American mobster who decides on living in Lillehammer, Norway, while in the witness protection program. Shortly after arriving, he buys a nightclub. He has trouble living a quiet life as his mafia habits contradict with the Norwegian culture.
Links: en.wikipedia.org
13,789 views