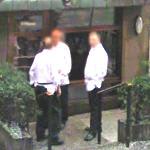 By Parabellum @ 2010-04-13 06:27:33
@ 40.76177, -73.961296
New York, New York (NY), US
Originally Il Vagabondo was a bar for the local clientele of this predominantly Italian neighborhood. The locals would drop by for an espresso and more often than not an espresso corretto and a game of bocce. To be in accordance with the liquor laws the establishment starting serving food, mostly simple sandwiches and then the occasional plate of pasta. Before long more than the locals were stopping by at this unique establishment for a refreshment and a bite to eat.

By the early seventies the place was so busy it expanded to the neighboring townhouse and subsequently the one next to that. Over the years patrons from all over the city, country and world as well as sports figures and celebrities have enjoyed the fun, easy going atmosphere, great food and low key attitude. And of course there's always the bocce court.
Links: www.ilvagabondo.com
657 views