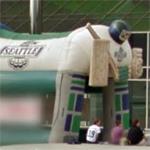 By milwhcky @ 2013-06-17 19:23:50
@ 47.386625, -122.239352
Kent, Washington (WA), US
The Seattle Thunderbirds are one of eight American teams competing in the Canadian Hockey League. The CHL is the top level of junior hockey in North America. There are currently 60 teams, each with a roster of players ranging in age from 16-20. Well over half of all NHL players honed their skills in the CHL system, with others coming from college hockey or Europe.

After six seasons of being located in Canada, the Thunderbirds franchise has played in the Seattle area since 1977. They were known as the Seattle Breakers until being renamed in 1985.

These goaltender displays are typically used to allow fans to take a slap shot, oftentimes giving the speed of the puck with a radar gun. The inflated walls keep stray pucks from doing damage to the surrounding area.
Links: en.wikipedia.org
372 views