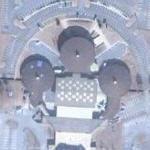 By kjfitz @ 2011-05-01 08:34:44
@ 33.578475, -86.072369
Lincoln, Alabama (AL), US
The International Motorsports Hall of Fame is a Hall of Fame dedicated to enshrining those who have contributed the most to auto racing either as a driver, owner, developer or engineer. Although people of many nationalities have been inducted (including racing legends such as Fangio, Moss, Senna) the majority of inductees chosen by the American organization are American drivers who competed in domestic series (particularly NASCAR). The last driver to be inducted who was not an American national was Nigel Mansell in 2005.

It was founded in 1982 by Bill France, Sr., the founder of NASCAR, and is currently located in Talladega, Alabama, adjacent to Talladega Superspeedway.
Links: en.wikipedia.org
805 views