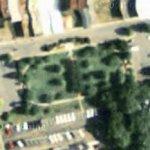 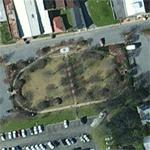 The Alabama native and son of NASCAR legend Bobby Allison won 19 career Winston Cup races, including the 1992 Daytona 500. He was the 1987 Rookie of the Year, and came very close to winning the season championship the year before his death.

Allison was piloting his helicopter and lost control while trying to land in the infield of the Talladega Superspeedway. He died the next day at a nearby hospital. His death came just a few months after the sport lost 1992 champion Alan Kulwicki in a plane crash.

The park features the Talladega Walk of Fame. A walkway in the shape of the nearby NASCAR speedway honors the best stock car drivers of the past and the present. Each year, fans vote to induct two new drivers to be honored in the park.
Links: www.talladegawalk.com, en.wikipedia.org
817 views