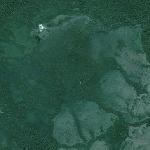 By Mike1989 @ 2013-01-28 11:13:27
@ -12.599632, -67.662392
La Paz, Bolivia (BO)
Iturralde Crater (also called Araona Crater) is a 5 mile (8 km) diameter circular feature in the Bolivian portion of the Amazon Rainforest, first identified from Landsat satellite imagery in 1985. Being so circular, it is argued by some scientists that it may be a meteorite impact crater. Because it is in an area of active sediment accumulation by rivers, it must be a geologically young feature, with estimates of its age ranging between 11,000 and 30,000 years. Unlike other young craters, it is very flat, so if it is of impact origin, perhaps the crater sunk into the soft sediments leaving only a circular 'ghost' marking the original rim. The site is very remote, but has been visited twice by scientific investigators, most recently by a team from NASA's Goddard Space Flight Center in September 2002. In both cases, the expeditions failed to find conclusive evidence for the origin of the feature.
Links: en.wikipedia.org
458 views