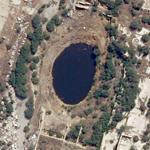 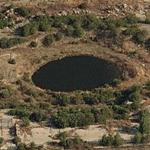 Three hundred tons of ammonium nitrates were stored (the maximum capacity was 2,000 tons) in the hangar #221. The whole factory was destroyed making a crater of depth 20 to 30 m (65 to 100 ft), with a diameter of 200 m (650 ft); steel girders were found 3 km away from the explosion. The explosion was heard 80 km away (50 miles). Due to the acoustics of the hills and the large sound, the explosion was reported as occurring in multiple places. Police at first believed that at least five bombs had simultaneously gone off. There is still controversy over the exact number of explosions.

The factory was close to the city: one of the most inhabited areas, Le Mirail, is just one kilometer away (0.6 miles). Several schools, one hospital and a psychiatric hospital had to be evacuated.

The disaster caused 29 deaths (28 from the factory, one lycéen — secondary school/high school pupil — from a neighbouring school), 2,500 seriously wounded and 8,000 light casualties. Two thirds of the city's windows were shattered, causing 70 eye wounds and several thousand wounds which had to be sutured. The full environmental consequences of the catastrophe are not yet completely known.

Well, a bunch of fertilizer got vaporized. Next question please.

dda
@ 2007-05-17 18:05:21
Just 10 days after the 9/11...
Other hypotheses explaining the explosion have been discussed by the public:
- an unexplained initial subterranean explosion roughly 8 seconds before the main AZF explosion, in the SNPE (Société Nationale de Propulsants et Explosifs) located mere hundreds of meters away from the AZF factory, which would have caused electrical deficiencies (as shown on the records by the national electric company EDF) and an electrical arc that could have provided the energy for igniting the ammonium nitrate stored in the hangar 221 of AZF (both sites are connected to the same high tension electrical lines),
- a meteorite fall directly on the chemical storagehouse,
- a rocket or explosive device detonating near the hangar 221,
- a misfire of an experiment in wireless transmission of energy using microwave beams, secretly conducted by the French Army, that caused both SNPE and AZF explosions, and the electrical anomalies mentioned above.

cthippo
@ 2010-09-01 22:36:46
I recall reading somewhere that it was caused by an incompatible chemical being mistaken for ammonium nitrate and dumped onto one of the piles of AN. The two slowly reacted in the presence of water until the autoignnition temperature was reached and, well, the rest is a hole in the ground.