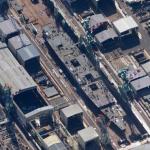 By kjfitz @ 2013-08-06 15:26:59
@ 35.390559, 139.632121
Yokohama, Japan (JP)
The Izumo-class helicopter destroyer (いずも型護衛艦 Izumo-gata-goei-kan) is a type of new helicopter carrier class being constructed for the Japan Maritime Self-Defense Force (JMSDF). The ships of this class will be the largest surface combatants of the JMSDF, taking over the mantle currently held by the Hyūga-class helicopter destroyers.