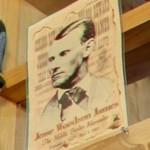 Jesse Woodson James (September 5, 1847 – April 3, 1882) was an American outlaw, gang leader, bank robber, train robber, and murderer from the state of Missouri and the most famous member of the James-Younger Gang. Already a celebrity when he was alive, he became a legendary figure of the Wild West after his death.
Links: en.wikipedia.org
578 views