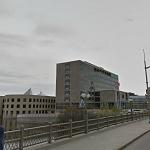 The building is located on Green Island at the point where the Rideau River empties into the Ottawa River. The historic city hall on Elgin Street had been destroyed by a fire in 1931. For the next 27 years the city operated out of temporary offices in the Transportation Building. The International Style building was opened on August 2, 1958 by Princess Margaret as a member of the Canadian Royal Family. It is noted for being the first building in Ottawa to be fully air conditioned. It was designed by John Bland of the firm Rother, Bland and Trudeau and is considered one of the most important International Style buildings in Canada. Winning the Massey Medal for design in 1959, modifications were made by Moshe Safdie in 1992-93.
Links: en.wikipedia.org
442 views