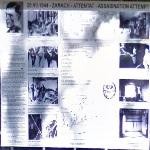 On July 20, 1944 a bomb meant to kill Hitler exploded in the Wolf's Lair conference room, injuring Hitler and killing four others. The coup failed and many high level German officers were executed as a result.
Links: en.wikipedia.org
351 views