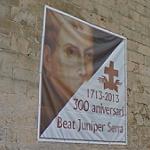 Serra was born Miquel Joseph Serra in Petra, Majorca (Mallorca), Spain. On November 14, 1730, he entered the Alcantarine Franciscans, a reform movement in the Order, and took the name "Junipero" in honor of Saint Juniper, who had also been a Franciscan and a companion of Saint Francis.
Links: en.wikipedia.org
334 views