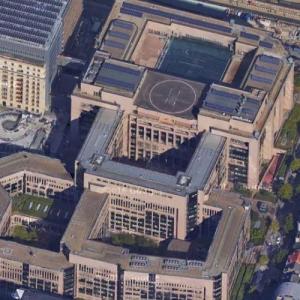 By DonMartini @ 2007-04-27 07:54:59
@ 50.841578, 4.381893
Brussels, Belgium (BE)
The Justus Lipsius building has been the headquarters of the Council of the European Union since 1995. Located in Brussels (B) on the Rue de la Loi/Wetstraat it is in the heart of the EU district, opposite the Berlaymont, the headquaters of the European Commission. Further south within the district are the European Parliament Buildings at Leopold Park. Unlike it's fellow partner in legislature, the European Parliament, visiting is restricted though meetings are now broadcast on the internet.

Like most buildings in the EU district its architecture is very modern, with all the European political insitutions located in this district it has been described as the de facto capital of the European Union.

The building is named after Justus Lipsius, a Flemish philologist and humanist, after the new building demolished the street that was named after him. The previous Council Building was named Charlemagne, as a major figure in European history.
Links: en.wikipedia.org
3,138 views