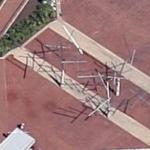 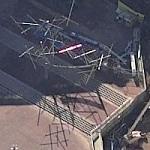 Snelson's work has not remained static, however Since the mid-1970s he has vastly expanded his range of formal configurations and has produced some of the most astonishing monumental works of his career. Projects such as the sixty-five foot Free Ride Home, 1974, at Storm King Art Center, or his largest work yet, Easy Landing, 1975-77, which was erected at the City of Baltimore's inner harbor waterfront, are the most ambitious pieces of all. These newer works, which seem almost random in the way the tubular members scatter and spill through huge expanses of space, are in fact built on the same principles and crystallographic patterns of all Snelson's sculptures. They combine the surging energies of the axial pieces and the capacity for complexity of the nuclear pieces with Snelson's most advanced technology. The result is a lyrical boldness extraordinary even for Snelson. Their lyricism is not the dense compactness of the nuclear works, nor the piercing verticality of the towers, nor yet the acrobatic feats of the cantilevers. Using elements of all of these, these vast new works possess a gracefulness that is nearly balletic, conveying a sense of poise, composure, and flotation, all on an epic scale. ''I like big'' remarks Snelson, ''It's part of the romance -the risk of getting into a scale where I can't any longer control it" But he has controlled it, and these works can only be thought of as masterpieces of their idiom.
Links: www.kennethsnelson.net
1,194 views