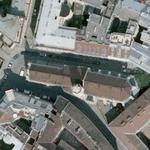 By adrbr @ 2008-04-08 16:15:20
@ 48.212956, 16.370047
Vienna, Austria (AT)
It is said that there was a wooden church at this place in the 9th century, which served as a place of worship for fishermen and sailors. The church is first mentioned in documents from 1158. The present building was built between 1394 and 1414 in gothic style, and in 1409, the church became part of the Diocese of Passau. It remained an enclave when the Diocese of Vienna was established in 1469. The church was desecrated in 1786 and gradually became dilapidated. It was used as a storeroom and stable during Napoleon's occupation of Vienna in 1809. In 1812, the church was renovated and newly consecrated. The church is associated with the Czech community in Vienna.

Sculptures on the façade of Maria am GestadeThe church's most striking characteristic is the 56 m (180 ft) high open work tower, built in 1419-1428. It is recognisable from a great distance and is depicted on the oldest images of the city. The choir contains two high gothic panels (1460). The windows contain surviving fragments of mediæval stained glass.
Links: start.redemptoristen.com
754 views