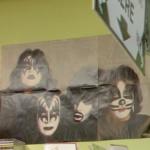 By kjfitz @ 2013-02-09 20:27:39
@ 41.882405, -87.626661
Chicago, Illinois (IL), US
Kiss (often stylized as KISS) is an American rock band formed in New York City in January 1973. Well known for its members' black and white face paint and flamboyant stage outfits, the group rose to prominence in the mid to late 1970s on the basis of their elaborate live performances, which featured fire breathing, blood spitting, smoking guitars, shooting rockets, levitating drum kits and pyrotechnics.

Stanley Harvey Eisen (born January 20, 1952), better known by his stage name Paul Stanley, is an American hard rock guitarist, singer, musician, painter and songwriter best known for being the rhythm guitarist, co-lead vocalist and co-frontman (with Gene Simmons) of the rock band Kiss. He is of Jewish and German ancestry, his mother was born in Berlin, Germany. He is the writer or co-writer of many of the band's highest-charting hits. Stanley established the "Starchild" character for his Kiss persona.

Gene Simmons (August 25, 1949) is an Israeli-born American rock bassist, singer-songwriter, producer, entrepreneur and actor. Known by his stage persona The Demon, he is the bassist/co-vocalist of Kiss, a hard rock band he co-founded in the early 1970s. With Kiss, Simmons has sold more than 100 million albums worldwide.