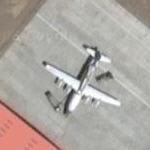 By Gosell @ 2006-06-28 11:44:06
@ 40.397075, 99.764711
Shuangchengzi, China (CN)
A Y-8 "Catagory III Platform" (High New 5) was taxiing on the runway at SAC, carrying a phased array radar. The aircraft first flew on January 14, 2005. This so-called "Balanced Beam Testbed" bears some resemblance to the Swedish Saab 340 AWACS aircraft with its electronically scanning phased array radar inside a large rectangular fairing above the fuselage. The radar is likely to be the product of the 38th Institute. The first Y-8 "Balance Beam Testbed" prototype (High New 1) took off on November 8, 2001 at SAC, after converted from a Y-8F-200 transport aircraft. The production version (formally named as KJ-200) is based on the new Y-8 "Catagory III Platform" which has a redesigned fuselage with a solid nose and a new tail section with the loading ramp removed. Two radomes are located at the nose tip and tailcone which may house additional antennas to provide full 360° coverage. More fairings can be seen at the wingtips and top of the tailfin as well. It also has an integrated wing fuel tank and 4 high-efficiency JL-4 6-blade propellers giving the aircraft a longer range and less noise. A C3I center is housed in a pressurized carbin as well. Both KJ-200 and KJ-2000 have demonstrated China's determination to acquire indigenous AWACS capability after the earlier A-50I setback. They are expected to coordinate J-7G, J-8F, J-10A, J-11A, JH-7A and H-6H/M via datalinks in the possible air compaigns against Taiwan. Two KJ-200 prototypes may have flown. However the latest news suggested one crashed on June 3, 2006 (mechanical failure?), which put the project temporarily on hold.
Links: mil.jschina.com.cn
1,851 views