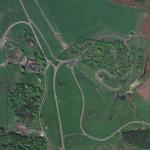 By Hinkkanen @ 2006-03-25 06:02:02
@ 53.446098, -2.807007
Knowsley, United Kingdom (GB)
Knowsley Safari Park is a tourist attraction in the town of Prescot, in the borough of Knowsley near Liverpool. Situated on the famous estate of Lord Derby, the vast reserve is home to several different animals including elephants, giraffes, lions, tigers and baboons. The Derby Estate have a tradition of keeping animals, ever since the famous artist and nonsense-poet Edward Lear was employed there in the 19th century to paint pictures of the Earl's collection. Nowadays it is open to the public, who are free to take a bus tour or to drive around the park themselves.

The baboons in particular have attracted attention for their loutish behaviour. Spoof TV presenter Alan Partridge remarked of monkeys that "if you’ve been to Knowsley Safari Park and they’re pulling the wipers off your windscreen and nicking your hub caps, you lose sympathy." Never a truer word was spoken.
Links: www.knowsley.com
1,180 views

Anonymous
@ 2006-03-25 12:08:50
Actually, I gained more sympathy for these animals after hearing this. To take animals away from their native climate and imprison them in the cold cloudy weather of Northern England is inhumane. Shame on th eKnowsley Safari Park and anybody who attends. May the baboons break off all your wiper blades!