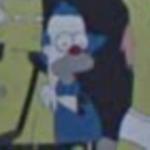 By adrbr @ 2012-06-15 10:50:45
@ -31.945575, 115.856851
Perth, Australia (AU)
Herschel Shmoikel Pinchas Yerucham Krustofski (a caricature of Jewish names), better known as Krusty the Klown, is a fictional character in the animated television series The Simpsons. He is voiced by Dan Castellaneta. He is the long-time clown host of Bart and Lisa's favorite TV show, a combination of kiddie variety television hijinks and cartoons including The Itchy & Scratchy Show. Krusty is often portrayed as a cynical, burnt out, addiction-riddled smoker who is made miserable by show business but continues on anyway. He has become one of the most common characters outside of the main Simpson family and has been the focus of several episodes, most of which also spotlight Bart.
Links: en.wikipedia.org
345 views