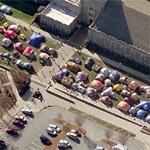 By mikeb9991 @ 2008-01-01 13:42:37
@ 35.997637, -78.941278
Durham, North Carolina (NC), US
Krzyzewskiville, or K-ville for short, is a phenomenon that occurs before major men's basketball games at Duke University. In simplest terms, it is the line for students wishing to gain access to the designated tenting games. It is often mistakingly referred to as a ticket line. However, there are no student tickets; students are admitted from the line 1.5 hours before each game.

Krzyzewskiville is named for Mike Krzyzewski, often called "Coach K", the much loved coach who has helped make Duke's Basketball program one of the best in the nation. He has been known to buy pizza for the K-ville residents from time to time and has held open forum "team meetings" with the Cameron Crazies before games against their arch-rival, the North Carolina Tar Heels.
Links: en.wikipedia.org
2,448 views